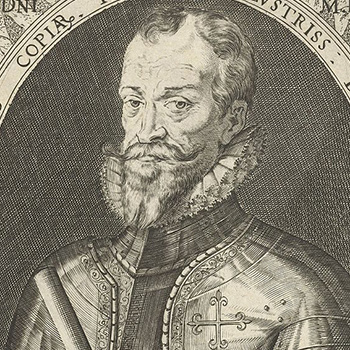 Don Pedro Enríquez de Guzmán, Count of Fuentes, was one of the great Spanish soldiers of the 16th and 17th centuries. In Lisbon in 1589 he was commander of the garrison under the direct orders of the Archduke Alberto. His mission was to defend Lisbon from three disparate dangers: Norris’ army on its march from Peniche, Drake’s Armada anchored and with its yardarms raised at the gates of the capital, and a possible faction of Antonio supporters who who could help the English to enter the city. He weakened Norris through harassment, isolation and scorched earth tactics, avoiding any battles until he could do so in favourable conditions. Then he struck with the right degree of severity, in such a way that the enemy fled with major losses but with few Spanish casualties. He waited in vain for Drake at the Oeiras-San Julián defensive line, which was strengthened with galleys, while above all keeping the bulk of the Spanish infantry within the city walls. The possible Antonio faction was controlled in the same way, together with excellent treatment of the nobility and the Portuguese people.