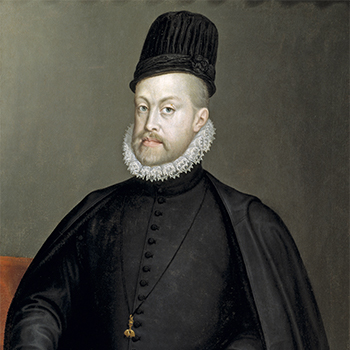 Philip II inherited a vast empire which, from 1580 and the integration of Portugal and its territories, went global. The other European powers – England, Holland and France – then went to war in opposition to this merger. Philip threw himself into the war and gave it the attention it deserved. Perhaps his most serious mistake was to turn a deaf ear to English provocation and to the advice of his generals, especially Álvaro de Bazán, and not to have taken decisive action in 1580, thereby giving England time to strengthen its navy, and letting its pirate raids go unpunished in times of peace. Another error was not to have established a deep water harbour in Flanders from which to launch the invasion of England. But in the end and following the defeat of the English Armada and the programme of naval rearmament, he set the dispute back on track and achieved its objectives: to retain the union of Iberia and the integrity of the Empire. The partial image of Philip II as the defeated leader of the Spanish Armada must be balanced by that of the victor of the English Armada, which had a fleet that was even greater than that of its predecessor.