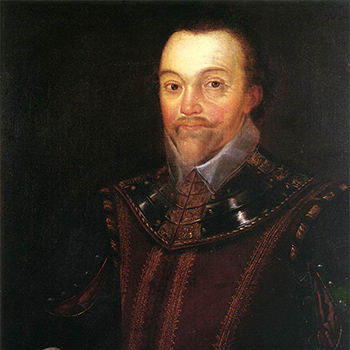 Sir Francis Drake was the commanding admiral of the English Armada. He was the best known of the English pirates and in peace time rendered great service to his country, although his booty did not always find its way into the Queen’s hands. His most famous voyage took place in the Pacific, where he employed the ruse of pretending to the unsuspecting coastal dwellers that his ship was Spanish and then suddenly attacking them. He was the greatest English sailor of his day and the first to set eyes on the Pacific ocean. However, he did not shine as an admiral in times of war, failing at Corunna and Lisbon with the English Armada, the largest fleet under his command, by not being bold enough to take the Tagus estuary. On that expedition he committed mistake after mistake before leading his ships to a major disaster. On his return to England he suffered a nasty shock which was revealed for the first time in the English Armada. Due to his failure he was demoted to supervising Plymouth’s coastal defences until six years later the Queen decided to put her trust in him once more and gave him a large fleet with which to conquer the isthmus of Panama. However, after facing María Pita he did not taste success again and the Panama expedition, where he died in 1596, was also a failure.