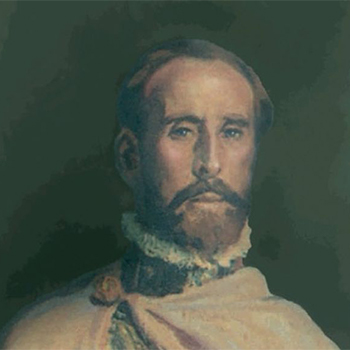 His powerful galleon, the San Juan, tenaciously tried to secure a major confrontation at close quarters that would have produced a Spanish victory. His bold strategy consisted of allowing himself to be surrounded by enemy ships on two occasions while awaiting the arrival of reinforcements and the broadening out of the fighting. In that way he came face to face with Drake’s Revenge, whose captain baulked at any hand to hand fighting. On the Spanish Armada’s return journey, Recalde picked up shipwreck survivors from other ships, gave Marcos de Aramburu the cables he needed and showed great comradeship, solidarity and seamanship. He thus succeeded in bringing to Corunna more than four hundred soldiers from the veteran infantry Tercios regiments, which later made up the nucleus of the defence of the city. Days later Recalde died, far from his native Bilbao, but Corunna was to survive thanks to the men he saved, and the resistance of Corunna was to contribute to the subsequent decisive defeat of the English in Lisbon. In a way, like El Cid, Recalde was to achieve his greatest victory after his death.